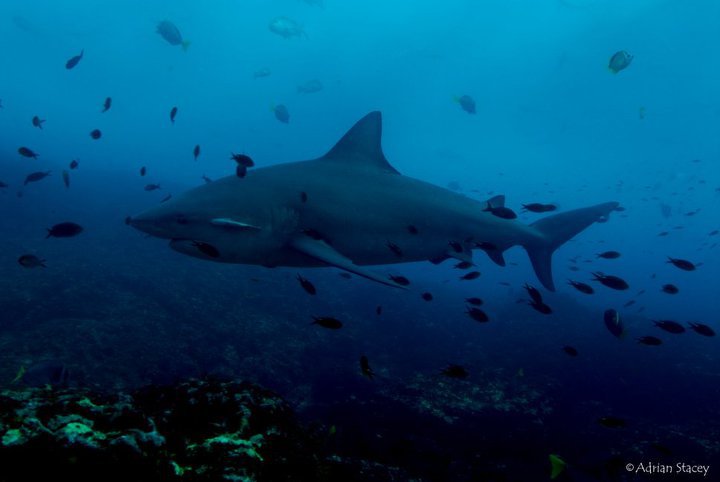 A question I´m constantly asked, especially among beginner divers, is “are we going to see any sharks”, “are sharks dangerous” and “what part of Australia are you from” (I´m British). Since the epic Speilberg Jaws movie that came to the big screen in the 1970´s my generation have grown up believing that sharks are man hunting killer monsters that will stop at nothing to find humans and kill them as soon as we enter the water. Reverse the situation so we´re talking about humans hunting sharks and we´re in a more accurate ball park: Fishing, shark fin soup and human impact have wiped out approximately 80% of certain shark species in about 30 years. But that´s a whole other incredulous blog all together.

According to the Guardian.com 2016 there are five things more likely to kill you than a shark: Lightening, a snake bite, 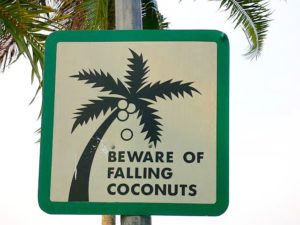 drowning in the bath, falling coconuts and being left handed when trying to use right handed appliances. Chances may increase slightly if you are more water bound than not, but as a professional scuba diver for 8 years I´m still here and will be sure to opt for showers over a bath from now on.

Here in Mexico there have only been 35 unprovoked fatal shark attacks since 1851 (sharkattackdata.com). So if the stats are true sharks really don´t want to eat us: We dive with great whites in Guadalupe, tigers on the Caribbean coast of Mexico and here in the Sea of Cortez there is a wonderful bull shark dive in Cabo Pulmo National Park. And we always, ALWAYS make it back to the boat. 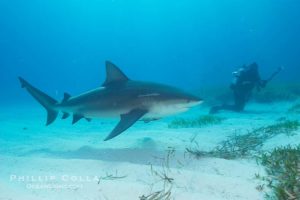 Unfortunately as recent as 2 weeks ago there was a ´presumed´ drowning incident off one the Cabo Pulmo beaches. Several social mediums were quick to accuse the local bull shark population that live there, jumping to the wrong conclusion and blaming a shark attack when there was no firm evidence to back up their story. Shark attacks sell papers (or nowadays days get ´liked´ ) much to the detriment of local business owners whose divers are now thinking twice about coming to enjoy the awesome interactions with these animals.

I have dived with the bull sharks of Cabo Pulmo countless times. They are normally found on shipwreck ´El Vencedor´ peacefully using it as a cleaning station or shark ´spa´, if you will. I have rarely seen any aggressive behavior, although it is equally irresponsible to write them off as big cuddly – wuddly, fishy – wishies. They are wild animals with big teeth and like any stray dog in the street a distance should be respected and the animals treated with caution at all times.  But this makes for one totally exhilarating and incredible dive.

Carlos Godinez, the Cabo Pulmo National Park director, cites the official report to our local source. He explains that when    the unfortunate drowning victim was recovered it was noted that animal interactions had occurred while he was in the water but it is entirely likely that this was after he passed away. He also adds that over the Easter period no fewer than 6000 tourists had camped and swam in the same area with no incidents occurring. No incidents have ever occurred there. I myself lived, swam, dived, paddled and kayaked on a daily basis (not all at once though, readers) for a year and a half and never heard of such events. Our thoughts are with the family of the man in question. 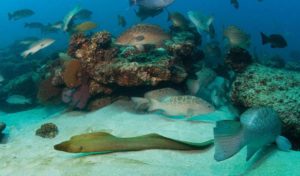 Cabo Pulmo is the home of the oldest Coral Reef in the northern hemisphere. It is a fringe reef; created by the upwellings and currents that bring coral lave through the neck of the Sea of Cortez from the Pacific and finally coming to rest on the shallow volcanic rock formations. ´Pulmo´ is derived from the latin word for lung: the reef gives life by providing nutrients to other corals further north in the sea of Cortez that wouldn´t exist without it. A fishing ban here in the 1990´s means stocks have replenished a whopping 426%. This coupled with the healthy reef means Cabo Pulmo has earned world heritage status and is commonly cited as a ´Hope Spot´(Dr Sylvia Earle 2016) where ecosystems thrive as they once did. The BBC, National Geographic and Mission Blue have all made documentaries here. This makes Cabo Pulmo an unmissable location among the serious divers who come to Los Cabos.