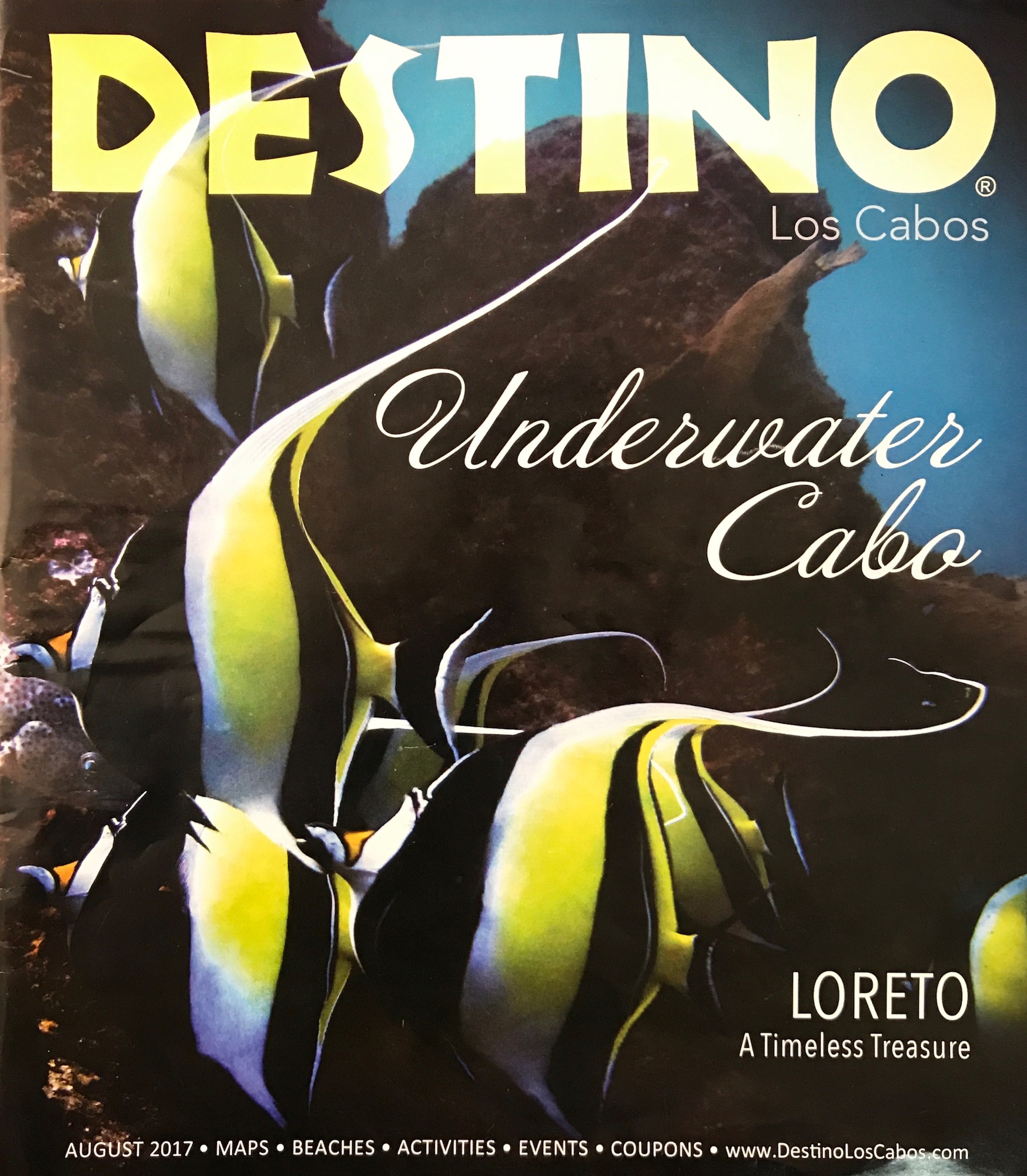 By Philipp MoserAugust 16, 2017No Comments

Diving into the Aquarium

A 9 foot bull shark approaches me, appearing suddenly through an impressive school of cautious snapper who congregate over the wreckage of a cargo boat that went down 30 years ago in a storm. Cruising at a consistent speed the impressive shark doesn’t make eye contact yet and seems to be heading straight for me and my divers. I stand my ground. At the last minute its electromagnetic senses, possibly those that brought it here in the first place, alert the awesome animal to other beings in its presence and she turns sharply almost brushing me with her tail. She disappears. Silhouettes of other bull sharks swim by now and then. Some coming in for a closer look but mainly not bothering with the divers who loudly blow bubbles and invade their living space. In the background a whale is calling a mate and the echoes of a song haunt our dive here in Cabo Pulmo. 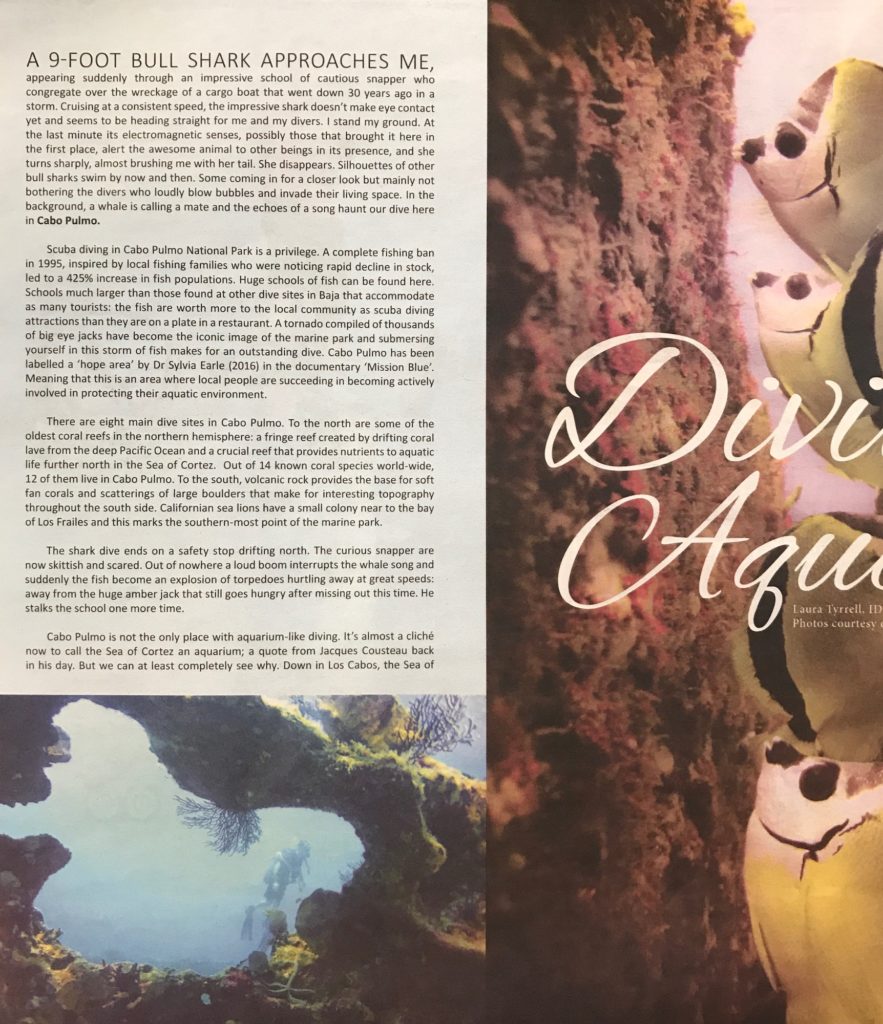 Scuba diving in Cabo Pulmo National Park is a privilege. A complete fishing ban in 1995, inspired by local fishing families who were noticing rapid decline in stock, led to a 425% increase in fish populations. Huge schools of fish can be found here. Schools much larger than those found at other dive sites in Baja that accommodate as many tourists: the fish are worth more to the local community as scuba diving attractions than they are on a plate in a restaurant. A tornado compiling of 1000’s of big eye jacks have become the iconic image of the marine park and submersing yourself in this storm of fish makes for an outstanding dive. Cabo Pulmo has been labelled a ‘hope area’ by Dr Sylvia Earle (2016) in the documentary ‘Mission Blue’. Meaning that this is an area where local people are succeeding in becoming actively involved in protecting their aquatic environment.

There are 8 main dive sites in Cabo Pulmo. To the north are some of the oldest coral reefs in the northern hemisphere: A fringe reef created by drifting coral lave from the deep Pacific Ocean and a crucial reef that provides nutrients to aquatic life further north in the Sea of Cortez.  Out of 14 known coral species world-wide 12 of them live in Cabo Pulmo. To the south, volcanic rock provides the base for soft fan corals and scatterings of large boulders that make for interesting topography throughout the south side. Californian sea lions have a small colony near to the bay of Los Frailes and this marks the southern-most point of the marine park.

The shark dive ends on a safety stop drifting north. The curious snapper are now skittish and scared. Out of nowhere a loud boom interrupts the whale song and suddenly the fish become an explosion of torpedoes hurtling away a great speeds: away from the huge amber jack that still goes hungry after missing out this time. He stalks the school one more time.

Cabo Pulmo is not the only place with aquarium-like diving. It’s almost a cliché now to call the Sea of Cortez 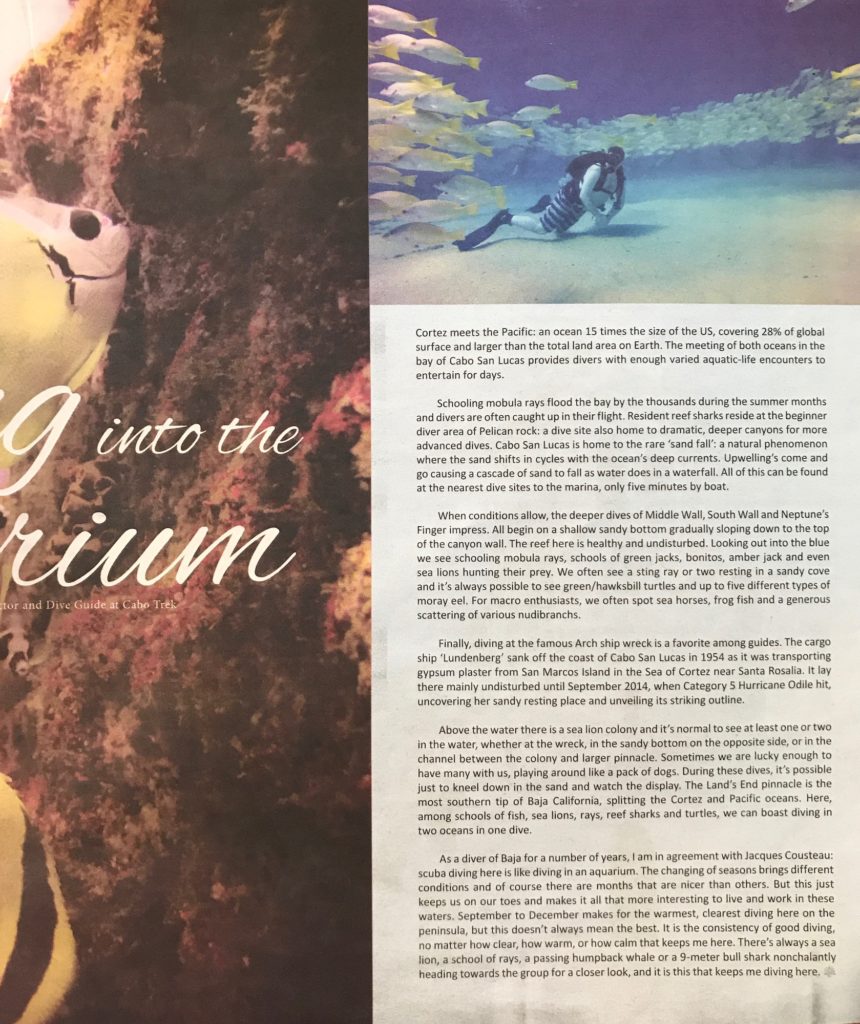 an aquarium; a quote from Jacques Cousteau back in his day. But we can at least completely see why. Down in Los Cabos the Sea of Cortez meets the Pacific: An ocean 15 times the size of the US, covers 28% of global surface and larger than the total land area on Earth. The meeting of both oceans in the bay of Cabo San Lucas provides divers with enough varied aquatic-life encounters to entertain for days.

Schooling mobula rays flood the bay in their thousands during the summer months and divers are often caught up in their flight. Resident reef shark reside at the beginner diver area of Pelican rock: a dive site also home of dramatic, deeper canyons for more advanced dives. Cabo San Lucas is home to the rare ‘sand fall’: a natural phenomenon where the sand shifts in cycles with the ocean’s deep currents. Upwelling’s come and go causing a cascade of sand to fall as water does in a waterfall. All of this can be found at the nearest dive sites to the marina, only 5 minutes by boat.

When conditions allow the deeper dives of Middle Wall, South Wall and Neptune’s Finger impress. All begin on a shallow sandy bottom gradually sloping down to the top of the canyon wall. The reef here is healthy and undisturbed. Looking out into the blue we see schooling mobula rays, schools of green jacks, bonitos, amber jack and even sea lions hunting their prey. We often see a sting ray or 2 resting in a sandy cove and it’s always possible to see green/hawksbill turtles and up to 5 different types of moray eel. For Macro enthusiasts we often spot sea horses, frog fish and a generous scattering of various nudibranchs.

Finally: diving at the famous Arch where the ship wreck is a favourite among guides. The cargo ship ‘Lundenberg’ sank off the coast of Cabo San Lucas in 1954 as it was transporting gypsum plaster from San Marcos Island in the Sea of Cortez near Santa Rosalia. It lay there mainly undisturbed until September 2014, when Category 5 Hurricane Odile hit, uncovering her sandy resting place and unveiling its striking outline.

Above the water there is a sea lion colony and it’s normal to see at least one or two in the water, whether at the wreck, in the sandy bottom on the opposite side or in the channel between the colony and larger pinnacle. Sometimes we are lucky enough to have many with us, playing around like a pack of dogs. During these dives it’s possible just to kneel down in the sand and watch the display. The Land’s End pinnacle is the most southern tip of Baja California splitting the Cortez and Pacific oceans. Here, among schools of fish, sea lions, rays, reef shark and turtles, we can boast diving in two oceans in one dive.

As a diver of Baja for a number of years I am in agreement with Jacques Cousteau: Scuba Diving here is like diving in an aquarium. The changing of seasons bring different conditions and of course there are months that are nicer than others. But this just keeps us on our toes and makes it all that more interesting to live and work in these waters. September to December makes for the warmest, clearest diving here on the peninsular but this doesn’t always mean the best. It is the consistency of good diving, no matter how clear, how warm or how calm that keeps me here. There’s always a sea lion, a school of rays, a passing humpback whale or a 9 meter bull shark nonchalantly heading towards the group for a closer look and it is this that keeps me diving here.

Cabo Trek focus is on educational tours in Baja California Sur region, please check out our other activities: